So, I remember when I was a kid seeing the movie “Rain Man.” The two most memorable lines were “20 minutes to Wapner” and “K-Mart” sucks. But hell, what does Tom Cruise know anyway, remember according to Wickipedia he thinks “that a human is an immortal alien spiritual being, termed a thetan, that is trapped on planet Earth in a physical body.” Hmmmmm. Anyway, I can tell you K-Mart does NOT SUCK! You would think that there would be cobwebs in the aisles of the “Big K” in the Hamptons. Well if you thought that you would be wrong! Check out the parking lot sometime, it’s filled with Mercedees, BMWs, Jaguars and even the occasional Rolls! Well, if that hasn’t gotten you over your phobia of blue light specials, there’s another way to get your Martha Stewart sheets and towels. Kmart has launched a new service in the Hamptons called mygofer.com. From laptops to laundry detergent and even those Lands End oxfords (they’re wrinkle free and last forever start at $29.95) can be delivered same day to your door! 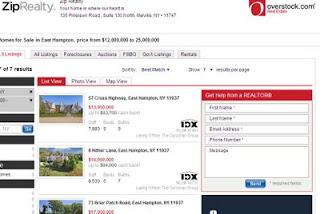 Along with that, who said the wealthy don’t want a deal?! Well if you take a look at overstock.com, some of the toniest locations in the Hamptons are apparently being marketed as “blue light specials.” Now I know that the more exposure the better when selling real estate but I wonder if advertising a $20,000,000 house on the same site that most go to buy discount Dockers shirts is hitting the right demographic? Just a thought.