In case you’ve been living under a rock the Hamptons are buzzing with the comings and goings … or should I say Komings… ugh… no … comings and goings of the Kardashians.   If you don’t believe me go to Google and search “Kardashian Hamptons” and you’ll get about 17,500 news articles come up.   Meanwhile search “Hamptons Deer Cull” and you get 2 articles.   I’m so glad we have our priorities straight! Anyway, while you read about “13 Hot Spots Too Classy for the Kardashians” or even “9 Things to Know about their Summer in the Hamptons,”   I’m going to add one more tid-bit to the mix.   I’m hearing via the grapevine that producers for the show….. are not only asking to see if they can shoot in local restaurants and get all the patrons to sign releases but that they’re also allegedly asking to get it for free!      Their claim is that their show has done a lot to help businesses increase traffic and everyone should be thrilled to have KK-K shoot in their restaurant.    SO, how is it going?   My sources say not so good.   The “K’s” are going after spots that are already hot and don’t need “Z” list celebrities to promote their business.   Think about it, do you really think the Hamptons A list need an endorsement from the Kardashians?    I’m sure Jerry Seinfeld and Gwyneth are both waiting with baited breath to see where they’ve decided to dine!   By the way, let’s also be real here.. .they’re living in NOYAC…. not Southampton… I’m dying to know if they’ve made it yet to Cromer’s for some fried chicken or mac and cheese!?

In honor of throwback Thursday, I’m doing a little plug for Stephen Talkhouse this weekend.  One of the best and underrated bands from the 1980’s is playing tomorrow night.   Yes, the English Beat featuring Dave Wakeling is coming to town.   I’ve seen the band here a few times over the past few years and in a way, it’s kind of a perennial.    Playing all their hits including “I Confess, Mirror in the Bathroom, Save it for Later” and even a few General Public songs (Wakeling was basically the heart of both bands), the show is amazing.  I think I’m too old to go to an arena and see anyone.     But the intimate setting of The Talkhouse makes for a really memorable night.    You can buy tickets here ahead of time and in case you don’t know the band, here’s one of my favorite songs by them… trust me you should go!

Tonight at Stephen Talkhouse.. ONE OF MY ABSOLUTE FAVORITE BANDS OF ALL TIME!!! Dave Wakeling and The English Beat will be performing at 8pm tonight in Amagansett. I have to say Dave puts on an amazing show and the music brings back some of my fondest memories of the ’80’s. Ok tickets are a little steep at $70 bucks (you can buy online or at the door) but the intimate atmosphere and the great music make it worth it!!! In case you’re unfamiliar with THE BEAT (their UK name) or THE ENGLISH BEAT here’s a little sample of their tunes.

Tomorrow night at the old Polish Hall.. .which was the old Hampton Hall… which is now the new 230 Elm in Southampton it’s a fiesta with a purpose! Cinco de Mayo Celebration for Time For Teens annual teen bereavement camp. Great evening of fun, music and prizes includes Latin dance instruction with Oscar Gonzalez, DJ, three hour open bar, appetizers, silent auction and raffle. Tickets are $60 in advance or $75 at the door. Purchase tickets at www.time4teens.org or by calling Laraine Gordon at 631-338-7258 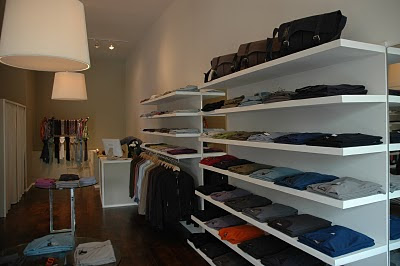 Its a good day for style hounds in the Hamptons… particularly the men. Finally there’s a place to shop for NICE men’s clothing in the Hamptons. Over the past few years we’ve seen Latham House… Mark, Force and Strike… and Brooks Brothers bite the dust. Now, I know there’s tons of Ralph Lauren shops in East Hampton but sometimes I don’t like wearing the same clothes as 95% of the population! But I digress…. designer Emile Lafaurie is now available at SEAN on Main St., Sag Harbor. www.seanstore.com

Brilliant colors and sleek designs are abundant in this chic boutique. Owner Sean Cassidy… and no he was never on The Hardy Boys.. has set up shop across the street from the American Hotel! You might SEAN from some of his other locations in Soho and the Upper West Side or even the Marais in Paris. This clothing is not for geeks!!! Anyway, stop by and say hello to manager Vincent Brandi (see photo) he’s friendly, cute and very helpful!

Now speaking of fashion or lack there of…. is it just me or do Lisa Perry’s designs look like they were made as part of a high school “Home Ec” project?! Personally, I think anyone wearing one of her Puke-a-dot designs is a few sandwiches short of a picnic. YOU PAID HOW MUCH!!? I know a 13 year old who’ll do the same dress for about 50 bucks.

Finally, sorry I’ve been busy actually making money and haven’t blogged as much as I should. I heard your nasty sniping I’m lazy, etc. Now, if you don’t stop it, I’ll abandon this blog for ever! We need to all just get along folks!!!

P.S. The English Beat is at the Stephen Talkhouse Friday night!! I’ll write more on this tomorrow!! ! 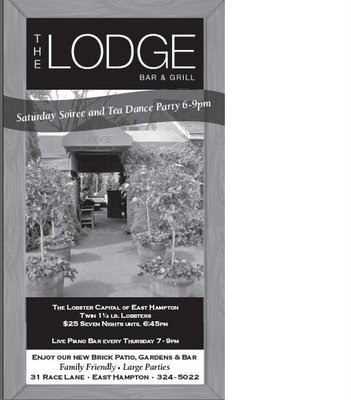