So it’s that time of the year for real estate agents. Yes, the renters are here! Now, I don’t want to sound like I’m Paul Revere here warning of impending doom. I love the summer renters!!! Some are great… but there are few stories that leave me wondering about just how some of these people survive in the world!

Recently I was made aware of a new term for certain renters that the locals use. They call them the “mirrorless.” What does that mean and who are these people? Well, let me tell you. These are the people who wear fur coats in June, speedos with bulging guts and high heels on the beach. Apparently it comes from one particular incident,that an old timer agent friend of mine told me about. A few years ago when a tennant complained to an agent that the house had no mirrors anywhere in the house the agent went to the hardware store and bought a few inexpensive stand alone full length ones. Well when they went to the house, they discovered these people weren’t kidding. The wife look like she put her make up on the Cyclone at Coney Island and the Husbands Coogi sweater was about two sizes too small. Thus the term “mirrorless” was born in a Hamptons summer rental. 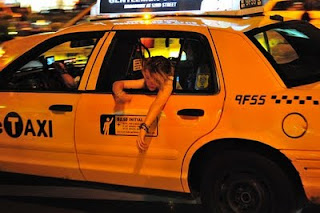 I’m not coining a new term but it is one I just discovered. It’s called an Earhardt! Apparently cab drivers in the Hamptons have been aware of this for years. Every year new comers come to the East End and move into their beautiful new 4 bedroom, 4 bath, heated pool compounds for three months. Now I appreciate that the newcomers to our community respect the rules of the roads and don’t drink and drive. But please from now on REMEMBER WHERE YOU LIVE! Saying, it’s a house with gray shingles off 27 doesn’t really help the driver. Nor does, “it has a pool in the backyard or I think it’s on Bay or Ocean or something like that.” Yes, apparently it’s an epidemic for cab drivers this time of year… tenants that get drunk and can’t remember where they live! If your a real estate agent like me, print little cards with the address for your new tenants. It’s the right thing to do. Otherwise, the cab drivers with be referring to them as an “Earhart.” Yes, like Amelia Earhart.

Also, I know I haven’t been blogging lately. I’ve actually been busy. But I have been trying some of the new restaurants around town and revisiting some of the old. Here in a nutshell what’s hot this year: Tutto Il Giorno the Southampton venue of the Sag Harbor restaurant… packed every night and hard to get in. Make sure to say hello to Walter, you know from the old Della Femina.. ooops… I mean Della

Famina. Speaking of the old “DF”… the East Hampton Grill is indeed open and apparently the buzz has been great. I went twice so far. I can recommend the Cod, the Salmon and the ribs are all amazing. The wine list is pretty extensive and well priced. So truly the wait has been worth it. They just started taking reservations , so plan ahead. I had dinner with a crowd from Palm Beach on Saturday and if it’s anything like there… you’ll need a good 4 or 5 days lead time at least.

On the down side of things, I don’t know what happened at Harbor Bistro. It was one of my favorites in East Hampton for a long time but something must have happened over the winter. The Caesar salad was watery, the tuna was dry and my friend sent his fish back. Also, the ribs ain’t what they used to be but don’t bother complaining the waiters are busy schmoozing at the bar and trying to get their attention was futile. It’s sad, this is one of the best locations in the Hamptons. I’ll have to give them a few weeks and see if they get back to where they were. Let’s hope so!